Clash of the Clans

Today we’ve got an exciting post, not only is there an exclusive extract but also a GIVEAWAY! So please give a warm welcome to martial arts author L Benitez and check out all the details about her book Clash of the Clans below ….

Greetings! Or as one might say in Japan, Konnichiwa!

My name is L. Benitez and I’m a self-published author of the Martial Arts fantasy Shinobi 7 Series. I have one book out called Shinobi 7: Trials of a Warrior, the first book of my ongoing series. However, today I’m here to discuss my newest release, Clash of the Clans, Shinobi 7’s very own companion book!

Clash of the Clans is not the official sequel to Trials of a Warrior, it’s a short story involving the characters from the Shinobi 7 universe. For those of you who have read Trials of Warrior, this is a nice bonus to get you excited for the official sequel/second installment. For those of you who have not read Trials of a Warrior, Clash of the Clans will give you a solid sample of my writing and peak your interest for each of the characters.

As read in Shinobi 7: Trials of a Warrior, the evil shinobi clan known as Blackthorn has started a war in the world known as Shaaku Den. The only warriors left to defend the innocent people are the Kitsune Clan, where the members of Sector 7 are introduced. Sector 7 must not only train to be soldiers, but they must grow together as a team and learn to rely on each other through the times of battle.

In this companion novel, there is no war in Shaaku Den, and the Blackthorn Clan was never formed. Therefore, all thirteen ancient shinobi clans are still around and the pressure of battle doesn’t weigh on the students of the Kitsune Clan. However, peace and harmony isn’t awaiting the six members of Sector 7… misadventures lie ahead!

I’m a Martial Artist myself and an active participator of Shotokan Karate. I’ve been in many tournaments. This book is about the nerves of competition and overcoming them, the pressures you place on yourself to perform, and the support that can come from your friends and teammates. It’s not about being the best, it’s about trying your best and having fun!

Here’s an exclusive excerpt from Clash of the Clans. The current point of view is from Tabitha Meko, one of the young girls and main characters in the story. Please enjoy!

You can enter the giveaway to get a copy of the book here: 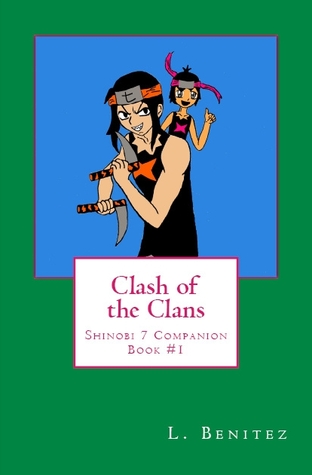 We arrived at the Black-Sho Clan early the next morning. Akira stayed true to her word and returned to our camp at five in the morning. She merely said, “Let’s go,” before we took off again. Today wasn’t like yesterday, our team wasn’t rushed to travel. Akira probably wanted the six of us to conserve our energy, that or the school wasn’t too much farther from us.

The forests of Viper Country began to get thinner and thinner as we walked. It was only an hour before I saw the outline of a building off in the distance. It was still far away because the building looked like the size of my thumb. I’ve still got a long way to walk.

Therefore, I chose to walk next to Kuroi. It wasn’t for the sake of his company! I walked next to him to try and get information out of him. My team leader has been at the Kitsune Clan for three years and for two of them he was all by himself. He knows a lot about the shinobi clans, even if he chooses to be a jerk about it and refuse to clue his team in.

“Getting awfully close there, Meko-Chan. Hoping my badass skills will rub off on you?” I purposely gagged after hearing Kuroi’s comment. “You wish!” I exclaimed.

He smirked at me. Smirks from Kuroi Kaze weren’t nice, they were always intended to be taunting.

Dang it, Kuroi caught onto my plan. “I’m just walking,” I replied.

“So go walk next to your gal-pal, Yami-San.” Kuroi often teased Yami about how sensitive he was and constantly told him to “be a man.”

“Quit being a jerk. I just wanna ask you more about Battle Month.” There, the truth finally came out of me.

Kuroi gave a short snarl. “I shoulda guessed that you or Yami-San would come bother me about that. It’s not like I’m some expert or whatever, I’ve only been to a Battle Month once.”

“Really? You’ve been there once before?” I asked with enthusiasm. My eyes instantly glued to Kuroi, I wanted to hear what he had to say more than ever.

He nodded. “Yeah. Once. Three months after I arrived at the clan.”

Back when Kuroi had his old teammates, I thought to myself. A red flag went off in my mind. Kuroi never talks about the old Sector 7, never. I need to be careful and not ask him about that.

“Which clan was it?” I asked him. I lost a peg of previous enthusiasm.

Kuroi furrowed his thick eyebrows, anger making its way into his face. “This one,” he growled, “the Black-Sho Clan.” Uh-oh.

I turned my head around to the front of me. We were almost at the building! A moment ago the place was miles and miles off, now it’s almost in my face. What in Shaaku Den? I thought.

Kuroi saw my look of perplexity. “It’s called an illusion, Meko-Chan,” he told my dryly.

The Black-Sho Clan was all indoors with an infrastructure made of creamy marble. The building was shaped like a large rectangle but it was hard to tell because of how big the place is compared to how small I am as a human. The open doors were almost as tall as the ceiling, which ascended above us by two stories. We stepped through the threshold and into the clan.

“Wow,” Cassie and I awed simultaneously.

The ceiling was made out of glass and the view of the bright blue skies was overhead. The floors were a simple concrete. On the outside wall of the clan, it was creamy marble that covered the building. Once I walked inside, the walls were a shiny black marble that gleamed and glistened brightly. That’s so cool!

My awe didn’t last long. I paid attention to what was in the room versus the room itself. There was plenty of open space around us and the room was already crowded with hundreds and hundreds of people. All these people… they’re all shinobis… oh spirits!

You can enter the giveaway to get a copy of the book here:

But if you can’t wait, or are naturally unlucky order your copy of the short story Clash of the Clans on Amazon.com when it releases September 20th!

And you can add the book on Goodreads: https://www.goodreads.com/author/show/7077413.L_Benitez