Today I’ve been interviewing Matthew Drzymala and talking about his novella The Bachelor. Here’s what he has to say. 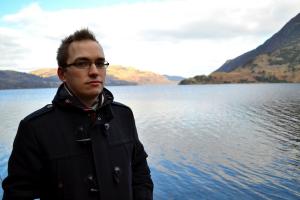 Let’s start off talking about Bumpkinton Tales. What is Bumpkinton?

Bumpkinton is a curiosity. It doesn’t appear on any maps, nor have most people heard of it. In fact, if you were to look on a map all you would find is a blank space where the village should be. Unless you live there or live in the nearby village of Eppforth, it’s almost always stumbled upon by day-trippers looking for anywhere but Bumpkinton.

The village is made up of a colourful cast of characters, ranging from the everyday person like you and me, to the randomly bizarre like Amelia Goose and Artichoke Caruthers.

Is this placed based on anywhere in particular? As an English author (and English interviewer) I think most people this side of the water probably know or have driven through a similar village, but can you explain a bit more about it for our overseas audience?

Bumpkinton isn’t based on any place in particular. The story behind Bumpkinton is a fluke really. I attended two writing classes and wrote some pretty dark stories. I was writing about assassins and psychopathic killers most weeks. Bumpkinton came about because for the final piece of work I was mentally tired. I couldn’t write another dark thriller, so I just decided to write something fluffy and light and Bumpkinton grew from there.

I’d like to think Bumpkinton is accessible to readers from overseas too. The humour is quite British but they are a light read that I think could be picked up by a reader from abroad looking for a silly English tale with a colourful cast of characters. I’ve never lived in a village so I am not writing from experience and I hope that that opens it up to those who have never lived in or ever been to one. I also hope that people who do live in villages find moments that make them think “Oh, that happens at our village hall!”.

The Bachelor is the second book of this series. Can you tell us a little bit about the other books?

Of course. I have three stories in total, but I count The Bachelor as the second. This is because it is a novella. The first novella is called Bittersweet and charts the story of Venetia and Timothy Ashurst. They are outsiders with a connection to the village and when Venetia stumbles upon an old photograph of her Grandpa who lived in the village as a young man, it ignites her dream to move to Bumpkinton and re-open the shop that her family once owed.

However, this is met with fierce opposition by the village busybody, Amelia Goose who has her own particular set of issues and doesn’t take kindly to ‘Townies‘.

The other story is just a short story. I released Bittersweet on 21st December 2013 so I wrote a very short Christmas tie-in. I tend to count the novella’s as my main stories and the shorts just as tie ins. Hence that is why I count The Bachelor as the second story in the main Bumpkinton Tales.

The Bachelor focuses on Fenton a ladies man who is spoken for. He sounds like a bit of a bad guy – is he or is he just misunderstood?

Personally, I think he is just very misunderstood. I wanted the reader to dislike him for being a bit of a greasy letch, but I gave him some backstory as to why he is like he is. I wanted to give him some heart and I hope he isn’t too disliked. He is a handsome man and he knows it, which doesn’t make his womanising right, but deep down he’s a good man.

He’s a bit cheesy and hopefully I managed to make people laugh at him for being a bit of a fool, but a rather handsome fool.

Obviously being a ladies man Fenton must be meeting a lot of the opposite sex, are there any interesting women in particular?

There are a number of ladies who are desperate for Fenton to choose them at the Singles Night. Two teachers, Fiona Little and Tamara Copeland vie for his affections and aren’t afraid to show their dislike for each other while Henrietta Plonk, a girl who works in the grocers, firmly believes she’s the woman for him, albeit being far too young for him.

Fenton just laps up the attention, sneaking off to see his secret lady while having no problem with attending the singles night to indulge in his favourite hobby of flirting.

What about the other characters of the book? Who is your favourite?

I would have to say Father Whitworth O’Grady. He appears as a major character in every story. However, don’t worry if you’re not a religious person, the stories are not based around the church. He is just a pure joy to write and when I write his parts, the words just flow so easily. He tries so hard to bring the community together but most of the time things go wrong and the finger is firmly pointed at him.

I think he’s loosely based upon myself, or his sense of humour and lack of patience at times is anyway. There was a comedy show in the 1990’s called Father Ted about priests. I wanted to make sure that Father O’Grady was nothing like him. I try and make him funny and at times, un-priest-like but not to the extent where he is badmouthing the church.

He is a deeply religious man, but sometimes doesn’t have the patience to put up with his moaning parishioners.

There’s also Erica Templeton and Spencer Levine who also have their own little story-thread in The Bachelor. I liked writing them, especially Erica. She’s a sweetheart.

Are there going to be more Bumpkinton Tales?

There sure are. I have a third novella almost finished but I have since decided I *may* make this into a novel. I need to strip it back and restart it and see what I can do with it. It’s a storyline I like and has my favourite title of the series so far, however, that shall not be revealed for some time yet.

Do you have a favourite part of the book or a scene you would like to share with us?

My favourite part of The Bachelor is a random piece of babbling from Father O’Grady when he is challenged about why he has a photograph of himself in biking leathers and huge sideburns on the mantelpiece:

Fenton smirked as he noticed a photograph of his brother from when he had been going through his sideburn phase.

“Taking a peep at old Ma and Pa, are we?” said Whitworth as he entered the room.

“I’m more interested in the ones where you appear to have dead ferrets stuck to the side of your head.”

“Oh come now brother, I look brilliant in those.” Whitworth scowled. “That’s when I had the bike and the leathers. The Rebel Priest, they called me. I sent shockwaves through this sleepy hollow when I arrived. ‘Who’s that guy?’ they’d say. ‘That’s Father Whitworth O’Grady,’ they’d reply. ‘He’s a priest, but he’s different. He’s a rebel priest. He’ll absolve you of your sins then ride the devil’s highway on his afternoon off.’”

I just love that bit of dialogue between Fenton and Whitworth. It’s something that was written in the first draft and never changed through the numerous re-writes.

And finally what is next for Matthew Drzymala?

I have another Bumpkinton Christmas short story out on 12th December 2014 called Albert’s Christmas. This story centres around the village tramp Albert Scatterhorn. We’ve only seen random glimpses of him so far with no real explanation as to why he’s there. I delve into that a little with this years story, but not too much. I have a future story for Albert that reveals all, but he has a sad past, that’s for sure.

I’m also considering a collection of children’s short stories as well as working on next years main Bumpkinton Tale. Whether it will end up a novel or a novella, I won’t know for another 8 or 9 months yet.

You can find out more about Matthew and all his books here: http://matthewdrzymala.com/

This entry was posted on Monday, October 13th, 2014 at 12:00 am and tagged with book blogger, english, Humour, indie, indie writer, interview, novella, short story and posted in Advertising, Interview. You can follow any responses to this entry through the RSS 2.0 feed.
« Surviving the Fog- Kathy’s Recollections
Lights Out »

3 responses to “The Bachelor”